After the Gopis had complained about Krsna stealing their butter, Mother Yaśodā decided to personally make the butter. She let all the maidservants engage in other household chores while she gathered the milk from the best cows. Nanda Baba had nine hundred thousand cows and a few cows were given the most flavoured grass to eat. It was these cows that Mother Yaśodā used the milk to churn into butter. Before she could start churning, she put a milk pan on the fireplace.

Dressed up in a saffron yellow sari and a belt around her hips, she then sat down to churn another batch of milk. As she turned the churning rope, she sang the wonderful pastimes of Krsna. The churning drum made the sound of a mridanga and her bangles supported her transcendental voice like sweet kartalas.

As she sang and churned, little Krsna woke up from his nap. Seeing His mother not around, He began to call for her. Mata! Mata! Mata!

Mother Yaśodā hearing Her son call her, replied, “O Krsna, I am here churning butter, come here.” Still in his sleepy state, Krsna crawled to His mother’s side. Mother Yaśodā continued to churn the butter. Krsna first pulled on Mother Yaśodā’s sari to stop her. Then he grabbed the churning ropes. Mother Yaśodā not stopping her activities of churning, picked up Krsna and placed him on her lap. She offered Him her breast milk to drink. Krsna peaceful began drinking his mother’s milk.

While He drank, Mother Yaśodā gazed into the beautiful face of her son. The feelings of Love and affection multiplied, and those feelings increased the flow of milk.

The milk that was on the kitchen, then began to overflow from the pan. Seeing the state of the milk, Mother Yaśodā hastily put Krsna down and ran to save the milk. These were the best milk in the land, so Mother Yaśodā did not want to lose it.

Not having completed drinking his mother’s breast milk, Krsna became angry. He picked up a stone and broke a pot of yogurt. Then he went into the store house and began stealing all the butter. As he enjoyed Himself eating, he was accompanied by the local monkeys.

When Krsna appeared as Lord Rama, he was helped by the army of monkeys. After the battle between Rama and Ravana, Lord Rama told the monkey army, that he was very indebted to them and in his next incarnation, he will sure repay them. This monkey army took birth in the land of Vraja and Krsna was now repaying them by offering them the butter that he had just eaten. 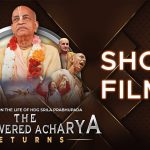