When Krsna saw Rādhārani cooking for Him, He became very agitated and became eager to hear Sri Rādhikā nāma kīrtana. Since it was impossible in His parental home, He engaged a young parrot in performing this kīrtana on the pretext of teaching him recital.

He made a parrot sit on His arm, which was like a sapphire rod, and caressed him with His soft lotus like hand. Feeding him ripe pomegranate seeds, that resembled His own gem-like teeth,He said: ” Oh, king of the parrots! Recite!”

May Narayana, whose body is like a mountain, protect us!

But this young parrot could not remember so many syllables. Merciful Krsna then caressed the parrot and told: “Alright, if you cannot recite the complete verse, then just say dhārādhara!

Parrot kept chanting the name of Rādhārānī. Krsna rewarded him with pomegranate seeds and joined the chanting – Rādhā Rādhā. 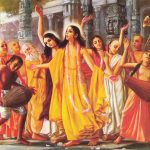 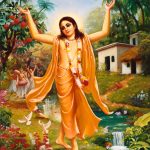