On this day Lord Krsna took the form of Sri Krsna Caitanya Mahaprabhu. There are two reason why Lord Caitanya appeared.

This is the yuga dharma – the religion of this age Kali- yuga.

The second reason is a deeper reason and the best way to understand this is read to a class by His Holiness Gaur Govinda Swami called the “Greed of the Lord.”

Here is a summary

“Both father and son relish this rasa, mellow. As the son sits on the father’s lap, the father relishes, and the son also relishes. The relishing is reciprocal. But the son relishes more than the father. So Nrsimhadeva developed a type of greed: “How can I sit on the lap of My father and relish that rasa?” From then on, after Nrsimhadeva, all the incarnations of the Lord accept a father and mother to fulfill that greed.”

Then the Lord appeared in Original Form as Lord Sri Vrndavan Krsna. In this incarnation had the opportunity to experience the highest friendship with the cow-herd boys. Actually in Lord Krsna incarnation all the above moods was experienced in full.

But then there was something that was much deeper that was not found in the other incarnations. That was the Love the Gopis of Vrndavan had for Him. And the person that exhibited that love was Srimati Radharani. This Love was beyond understanding, even for Krsna. Krnsa wanted to experiences this love of Srimati Radharani. But He could not do it in this incarnation.

“Although Radha and Krsna are one in one in Their indentity, They have seperated Themselves eternally. Now these two transcendental identities have again united in the form of Sri Krsna Caitanya Mahaprabhu.” ( C.C Adi 1.4)

In this form of Sri Krsna Caitanya Mahaprabhu, Lord Krsna experienced the Highest form of Love. And aslo preached to the world the highest glories Srimati Radharani.

“The first greed is this: What is the love of Radharani and how can I relish it? The second greed: What is My excellent all-attractive beauty? I can’t relish Myself. So how can I have it? And the third greed: What happiness does Radharani get by relishing My all-attractive excellent beauty? How can I have it? The desire to fulfil these three types of greeds remains unfulfilled in the pastimes of Krsna. Therefore the Lord appeared again as Sri Caitanya Mahaprabhu. The fulfilment of these types of desires isantaranga karanam, the internal cause, for Lord Caitanya’s descent.” 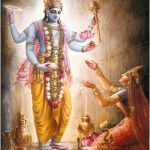 Our Prayers to Krishna | by Giriraj Dasa
Next Article 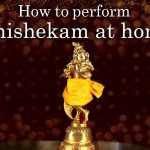 How to perform abhishekam to Lord Krishna at home?
Leave a comment