O son of Kuntī, the nonpermanent appearance of happiness and distress, and their disappearance in due course, are like the appearance and disappearance of winter and summer seasons.[BG 2.14] They arise from sense perception, O scion of Bharata, and one must learn to tolerate them without being disturbed. O best among men [Arjuna], the person who is not disturbed by happiness and distress and is steady in both is certainly eligible for liberation.[BG 2.15]

That which pervades the entire body you should know to be indestructible. No one is able to destroy that imperishable soul.[BG 2.17] The material body of the indestructible, immeasurable and eternal living entity is sure to come to an end; therefore, fight, O descendant of Bharata.[BG 2.18]

As a person puts on new garments, giving up old ones, the soul similarly accepts new material bodies, giving up the old and useless ones.[BG 2.22]

The soul can never be cut to pieces by any weapon, nor burned by fire, nor moistened by water, nor withered by the wind.[BG 2.23]

This individual soul is unbreakable and insoluble, and can be neither burned nor dried. He is everlasting, present everywhere, unchangeable, immovable and eternally the same.[BG 2.24]

One who has taken his birth is sure to die, and after death one is sure to take birth again. Therefore, in the unavoidable discharge of your duty, you should not lament.[BG 2.27]

Do thou fight for the sake of fighting, without considering happiness or distress, loss or gain, victory or defeat—and by so doing you shall never incur sin.[BG 2.38]

Men of small knowledge are very much attached to the flowery words of the Vedas, which recommend various fruitive activities for elevation to heavenly planets, resultant good birth, power, and so forth. Being desirous of sense gratification and opulent life, they say that there is nothing more than this.[BG 2.42-2.43]

In the minds of those who are too attached to sense enjoyment and material opulence, and who are bewildered by such things, the resolute determination for devotional service to the Supreme Lord does not take place.[BG 2.44]

You have a right to perform your prescribed duty, but you are not entitled to the fruits of action. Never consider yourself the cause of the results of your activities, and never be attached to not doing your duty.[BG 2.47]

By thus engaging in devotional service to the Lord, great sages or devotees free themselves from the results of work in the material world. In this way they become free from the cycle of birth and death and attain the state beyond all miseries [by going back to Godhead].[BG 2.51]

The Supreme Personality of Godhead said: O Pārtha, when a man gives up all varieties of desire for sense gratification, which arise from mental concoction, and when his mind, thus purified, finds satisfaction in the self alone, then he is said to be in pure transcendental consciousness.[BG 2.55]

One who is not disturbed in mind even amidst the threefold miseries or elated when there is happiness, and who is free from attachment, fear and anger, is called a sage of steady mind.[BG 2.56]

One who is able to withdraw his senses from sense objects, as the tortoise draws its limbs within the shell, is firmly fixed in perfect consciousness.[BG 2.58]

One who restrains his senses, keeping them under full control, and fixes his consciousness upon Me, is known as a man of steady intelligence.[BG 2.61]

While contemplating the objects of the senses, a person develops attachment for them, and from such attachment lust develops, and from lust anger arises.[BG 2.62]

One who is not connected with the Supreme [in Kṛṣṇa consciousness] can have neither transcendental intelligence nor a steady mind, without which there is no possibility of peace. And how can there be any happiness without peace?[BG 2.66]

That is the way of the spiritual and godly life, after attaining which a man is not bewildered. If one is thus situated even at the hour of death, one can enter into the kingdom of God.[BG 2.72] 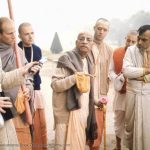 Importance of Sadhu, Guru and Shastra
Next Article 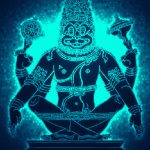