Once there was a conversation between Narada Muni and Bahu-lasva. The sage Bahu-lasva asked Narada Muni, what pious deed did Tṛṇāvarta have, to have been touched by Lord Kṛṣṇa. Narada Muni then narrated the previous life of Tṛṇāvarta.

In his previous life, he was a powerful King of Pandu-desa by the name of Sahas-raksha. He was a devotee of Lord Hari. He performed all the religious principles of the Vedas and he was a great giver of charities.

Once on the shore of river Reva, a splendid place covered with flowering vines, he was enjoying with a thousand beautiful women. Durvāsā Muni appeared in that place and the king did not receive the Muni. He did not bow and offer his respects. Durvāsā Muni became angry and cursed the king to become a demon.

Coming to his senses, the king covered himself and came out of the association of the thousand women. He fell at the feet of Durvāsā Muni begging for forgiveness. Being Compassionate towards the King Durvāsā Muni gave him the blessing that he will take birth as a demon, and he will attain liberation when Lord Kṛṣṇa touches him.

When Sri Kṛṣṇa was one year. Mother Yaśodā was engaged in the playful action called Lalayanti. She was throwing Kṛṣṇa in the air and catching him as he came down. Kṛṣṇa was laughing loudly as he was caught in the hands of his mother. Mother Yaśodā was enjoying this pastime with her little Lala. But Kṛṣṇa could foresee that the demon Tṛṇāvarta was coming to Vrindavan. He did not want to make his mother worry when the demon carries him away. So, He made Himself become heavy. Mother Yaśodā had to stop the Lala-yanti play and put Kṛṣṇa down. Thinking that the child has been attacked by another demon, she prayed to Lord Narayan for His protection. She called the brahmana to chant mantras and she began to engage herself in other household affairs. While Kṛṣṇa sat on the ground, the demon Tṛṇāvarta appeared as a whirlwind. He was another demon sent by Kamsa to kill Kṛṣṇa.

The very same Krsna who was, minutes ago, heavy for his mother to carry, became lighter than the Vrndavan grass.  The demon carried Krsna into the air. The wind created by the demon covered all the land of Vraja. Covering the whole land of Gokula with particles of dust, that demon, acting as a strong whirlwind, covered everyone’s vision and began vibrating everywhere with a great fearful sound. For a moment, the whole pasturing ground was overcast with dense darkness from the dust storm, and mother Yaśodā was unable to find her son where she had placed Him. Because of the bits of sand thrown about by Tṛṇāvarta, people could not see themselves or anyone else, and thus they were illusioned and disturbed.  Because of the dust storm stirred up by the strong whirlwind, mother Yaśodā could find no trace of her son, nor could she understand why. Thus, she fell down on the ground like a grief stricken cow who has lost her calf and began to lament very pitifully.

When the force of the dust storm and the winds subsided, Mother Yaśodā’s friends and the other Gopis, approached mother Yaśodā, hearing her pitiful crying. Not seeing Kṛṣṇa present, they too felt very much aggrieved and joined mother Yaśodā in crying, their eyes full of tears. The center of all the activities of the Gopis was Kṛṣṇa. When Kṛṣṇa was there, they were happy, and when Krsna was not there, they were unhappy. Thus, when mother Yaśodā was lamenting Kṛṣṇa’s absence, the other ladies also began to cry.

Having assumed the form of a forceful whirlwind, the demon Tṛṇāvarta took Krsna very high in the sky, but when Kṛṣṇa became heavier than the demon, the demon had to stop his force and could go no further. Tṛṇāvarta then began to fall to the ground. He wanted to save himself. He tried to release himself from the grips of Kṛṣṇa , But Kṛṣṇa was holding on tightly to his neck and Tṛṇāvarta had difficulties getting Krsna off. With Kṛṣṇa grasping him by the throat, Tṛṇāvarta choked, unable to make even a sound or even to move his hands and legs. His eyes popping out, the demon lost his life and fell, along with the little boy, down to the ground of Vraja. The demon fell from the sky onto a big slab of stone, his limbs dislocated, as if he had been pierced by the arrow of Lord Shiva like Tri-pura-sura. The demon fell flat from the sky, and Kṛṣṇa was playing on his chest very happily, un-injured and free from misfortune. Not at all disturbed because of being taken high in the sky by the demon, Kṛṣṇa was playing and enjoying. The Gopis immediately picked Kṛṣṇa up from the chest of the demon and delivered Him, free from all inauspiciousness, to mother Yaśodā. The Gopis and cowherd men, headed by Nanda Maharaja, were extremely happy. 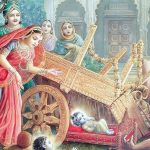 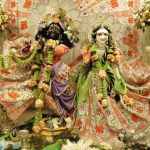