Satakasura was in a ghostly body. Ghosts do not possess material bodies, so their desire is to always have a material body. In his previous life he was the son of Hiraṇyākṣa named Ut-kaca. He had a huge body.  Once he went to the hermitage of Lomasa Muni and broke some trees there. The Muni cursed him to become body-less. Utkaca then fell at the Muni’s feet and begged for mercy. The Muni told him that in the next manvantara he would be touched by the foot of the Lord and would be liberated. This Satakasura took possession of the cart that Krsna was sleeping under.  He was looking for an opportunity to make some mischief and kill Krsna.

After the Killing of Putana, Mother Yaśodā, along with the other elderly Gopis performed a ceremony called Ut-thana. This ceremony was celebrated to create good fortune for the child. While preparing for the ceremony, Mother Yaśodā had bathed baby Krsna and dressed him up. She also took her bath and dressed herself up. She then took Krsna to where all the brahmanas were chanting Vedic Mantras. While she heard the brahmanas chant, baby Krsna fell asleep on the lap of Mother Yaśodā. Mother Yaśodā then laid Krsna to sleep under a cart in the corner of the yard.

While Mother Yaśodā and Nanda Baba attended to the guests and brahamanas, Krsna woke up. He was crying for His mother’s milk. But Mother Yaśodā could not hear little Krsna cry in the corner of the courtyard under the cart.  Lifting his lotus feet, which is described to be as soft as leaves, He kicked the cart, breaking it.  With the breaking of the cart, Krsna also killed the demon Satakasura.

On the cart there were many little utensils made of various metals, and all of them scattered hither and thither.  Hearing the falling of all the utensils, Mother Yaśodā rushed to the place where the cart was. They saw the wheels separated from the axle, the hubs and spokes fell apart, and the pole of the hand-cart broke. Although Krsna laid underneath fragile as a parijata flower, he was not harmed in any way.  The residents of Vraja could not understand what had happened.  Then the small children, who were playing nearby, told them that it was Krsna that kicked the cart. The adults could not believe the statements of these children. After that Mother Yaśodā took Krsna and fed him her milk. 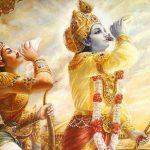 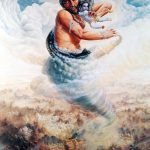 The killing of Tṛṇāvarta (Wind Demon)
Leave a comment