Once a friend of Balarama saw Krsna eating some mud in a solidary place. He told Krsna that, He should not be eating mud. Krsna then told Him , “Please leave Me alone and go away from here”. Balarama’s friend then went to Balarama and complained to Him, that Krsna is eating dirt. Balarama, along with all His Gopa friends out of concern for the safety of Krsna, went to Mother Yaśodā and lodged the compliant that Krsna is eating dirt.

Mother Yaśodā became anxious as to why Her son would eat dirt when she has so many wonderful and tasty sweetmeats, made from the purest milk, from the most expert cows. She took, Krsna on her lap and asked why He has been eating dirt.  Krsna said that He did not eat any dirt.  But Mother Yaśodā told him that all the cowherd boys, headed by Balarama has complained that He has eaten dirt.

Krsna replied, “My dear mother, they have plotted together and lodged a complaint against Me so that you will punish Me. My elder brother, Balarama, has joined them. Actually, I have not done this. Take My words as true. Do not be angry and chastise Me. My dear mother, I have never eaten dirt. All My friends complaining against Me are liars. If you think they are being truthful, you can look directly into My mouth and examine it.”

Mother Yaśodā then asked Krsna to open His mouth so she can see for herself. When Krsna opened His mouth wide by the order of mother Yaśodā, she saw within His mouth all moving and non-moving entities, outer space, and all directions, along with mountains, islands, oceans, the surface of the earth, the blowing wind, fire, the moon and the stars. She saw the planetary systems, water, light, air, sky, and creation by transformation of a-han-kara (False ego). She also saw the senses, the mind, sense perception, and the three qualities of goodness, passion and ignorance. She saw the time allotted for the living entities, she saw natural instinct and the reactions of karma, and she saw desires and different varieties of bodies, moving and non-moving. Seeing all these aspects of the cosmic manifestation, along with herself and Vrindavana-dhama, she became doubtful and fearful of her son’s nature.

When mother Yaśodā saw this wonderful manifestation within the mouth of her child, she began to argue within herself about whether it was a dream. Then she considered, “I am not dreaming, because my eyes are open. I am actually seeing what is happening. I am not sleeping, nor am I dreaming. Then maybe this is an illusion created by deva-māyā. But that is also not possible. What business would the demigods have showing such things to me? I am an insignificant woman with no connection with the demigods. Why should they take the trouble to put me into deva-māyā? That also is not possible.”

Then mother Yaśodā considered whether the vision might be due to bewilderment: “I am fit in health; I am not diseased. Why should there be any bewilderment? It is not possible that my brain is deranged, since I am ordinarily quite fit to think. Then this vision must be due to some mystic power of my son, as predicted by Gargamuni.”

Thus she finally concluded that the vision was due to her son’s activities, and nothing else. She began to think that Krsna was the Supreme Narayana, that had taken birth as her son. Understanding the mind of Mother Yaśodā, Krsna did not want to disturb that parental mood of His Mother.  He moved his eyes from Left to right and then right to left. In this way, Mother Yaśodā’s concentration on Lord Narayana was disturbed. She then could see her beautiful baby Krsna, sitting on Her lap and considered Him to be the centre of her heart. 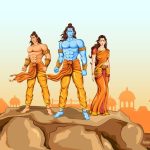 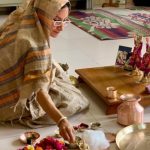