King Kaṁsa not only occupied the kingdoms of the Yadu, Bhoja and Andhaka dynasties and the kingdom of Śūrasena, but he also made alliances with all the other demoniac kings, as follows: the demon Pralamba, demon Baka, demon Cāṇūra, demon Tṛṇāvarta, demon Aghāsura, demon Muṣṭika, demon Ariṣṭa, demon Dvivida, demon Pūtanā, demon Keśī and demon Dhenuka. At that time, Jarāsandha was the king of Magadha Province (known at present as Bihar State). Thus by his diplomatic policy, Kaṁsa consolidated the most powerful kingdom of his time, under the protection of Jarāsandha. He made further alliances with such kings as Bāṇāsura and Bhaumāsura, until he was the strongest. Then he began to behave most inimically toward the Yadu dynasty, into which Kṛṣṇa was to take His birth.

Being harassed by Kaṁsa, the kings of the Yadu, Bhoja and Andhaka dynasties began to take shelter in different states, such as the state of the Kurus, the state of the Pañcālas and the states known as Kekaya, Śālva, Vidarbha, Niṣadha, Videha and Kośala. Kaṁsa broke the solidarity of the Yadu kingdom, as well as the Bhoja and Andhaka. He made his position the most solid within the vast tract of land known at that time as Bhārata-varṣa.

When Kaṁsa was killing the six babies of Devakī and Vasudeva one after another, many friends and relatives of Kaṁsa approached him and requested him to discontinue these heinous activities. But all of them became worshipers of Kaṁsa.

When Devakī became pregnant for the seventh time, a plenary expansion of Kṛṣṇa known as Ananta appeared within her womb. Devakī was overwhelmed with both jubilation and lamentation. She was joyful, for she could understand that Lord Viṣṇu had taken shelter within her womb, but at the same time she was sorry that as soon as her child would come out, Kaṁsa would kill Him. 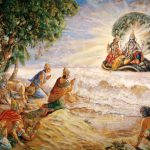 KB 1 – The Advent of Lord Krsna
Next Article 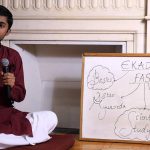