The Supreme Personality of Godhead has a cheerful, lotus-like countenance with ruddy eyes like the interior of a lotus and a swarthy body like the petals of a blue lotus. He bears a conch, discus and mace in three of His hands.

It is definitely recommended herein that one concentrate his mind upon the form of Viṣṇu. There are twelve different forms of Viṣṇu, which are described in Teachings of Lord Caitanya. One cannot concentrate his mind on anything void or impersonal; the mind should be fixed on the personal form of the Lord, whose attitude is cheerful, as described in this verse. Bhagavad-gītā states that meditation on the impersonal or void features is very troublesome to the meditator. Those who are attached to the impersonal or void features of meditation have to undergo a difficult process because we are not accustomed to concentrating our minds upon anything impersonal. Actually such concentration is not even possible. Bhagavad-gītā also confirms that one should concentrate his mind on the personality of Godhead.

The color of the Personality of Godhead, Kṛṣṇa, is described here as nīlotpala-dala, meaning that it is like that of a lotus flower with petals tinted blue and white. People always ask why Kṛṣṇa is blue. The color of the Lord has not been imagined by an artist. It is described in authoritative scripture. In the Brahma-saḿhitā also, the color of Kṛṣṇa’s body is compared to that of a bluish cloud. The color of the Lord is not poetical imagination. There are authoritative descriptions in the Brahma-saḿhitā, Śrīmad-Bhāgavatam, Bhagavad-gītā and many of the purāṇas of the Lord’s body, His weapons and all other paraphernalia. The Lord’s appearance is described here as padma-garbhāruṇekṣaṇam. His eyes resemble the inside of a lotus flower, and in His four hands He holds the four symbols: conchshell, discus, mace and lotus.

Your son Krsna appears as an incarnation in every millennium. In the past, He assumed three different colors-white, red and yellow-and now He has appeared in a blackish color. [In another Dvapara-yuga, He appeared (as Lord Ramacandra) in the color of suka, a parrot.] All such incarnations have now assembled in Krsna.
As here it is clearly stated that all the incarnation are now assembled in Krishna. So the deity form of Krishna have all these colors mentioned above.

Srila Jiva Gosvami, the most authoritative acarya of our sampradaya, he has explained like this. Krsna-varnam means always chanting Hare Krsna. Krsnam varnayati, describing Krsna, “Hare Krsna, Hare Krsna.” This is description of Krsna, addressing Krsna. So therefore krsna-varnam, or varnam means category. Just like brahmana-varna, ksatriya-varna. So in that way krsna-varna means He is Krsna, in the category of Krsna. Either you take this meaning or that meaning, krsna-varnam. But Krsna is black, and He is tvisa, by the complexion, akrsna. Akrsna means not Krsna. Now, there are so many colors. So everything is akrsna. That color, all the colors are mixed together, it becomes black. Otherwise there are many different colors. So akrsna means different color, “not krsna,” not black. So what is the actual? That we have to refer to sastra again, that Krsna, in how many categories of color He appears? That is stated in the Bhagavatam. When Krsna was born, then Gargamuni was calculating about His horoscope, and he said to Nanda Maharaja that “This, your child…” Idanim krsnatam gatah. Suklo raktas tatha pita idanim krsnatam gatah. “Your child had formerly white color.” White color… Sometimes some critics criticize us that “Krsna everywhere He is black. Why in your temple white?” But it is said that sukla, suklo raktas tatha pita idanim krsnatam gatah: “Your son had other colors also, white and red and yellow, and now He has assumed blackish color.” 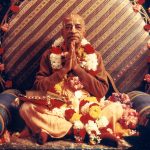 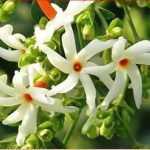 The Story of the Parijata Flower
Leave a comment