When Lord Kṛṣṇa heard the prayers of mother earth, He immediately assured her of immunity from all fearful situations. He said to Bhagadatta, “Don’t be afraid.” Then He entered the palace of Bhaumāsura, which was equipped with all kinds of opulences. In the palace of Bhaumāsura, Lord Kṛṣṇa saw 16,100 young princesses, who had been kidnapped and held captive there. When the princesses saw the Supreme Personality of Godhead, Kṛṣṇa, enter the palace, they immediately became captivated by the beauty of the Lord and prayed for His causeless mercy. Within their minds, they decided to accept Lord Kṛṣṇa as their husband without hesitation. Each one of them prayed to Providence that Kṛṣṇa might become her husband. Sincerely and seriously, they offered their hearts to the lotus feet of Kṛṣṇa with an unalloyed devotional attitude. As the Supersoul in everyone’s heart, Kṛṣṇa could understand their uncontaminated desire, and He agreed to accept them as His wives. Thus He arranged for suitable garments and ornaments for them, and each of them, seated on a palanquin, was dispatched to Dvārakā City. Kṛṣṇa also collected unlimited wealth from the palace, a treasure of chariots, horses, jewels and so on. He took from the palace fifty white elephants, each with four tusks, and all of them were dispatched to Dvārakā.

After this incident, Lord Kṛṣṇa and Satyabhāmā entered Amarāvatī, the capital city of the heavenly planets, and they immediately entered the palace of King Indra and his wife, Śacīdevī, who welcomed them. Kṛṣṇa then presented Indra with the earrings of Aditi.

When Kṛṣṇa and Satyabhāmā were returning from the capital city of Indra, Satyabhāmā remembered Kṛṣṇa’s promise to give her a pārijāta tree. Taking the opportunity of having come to the heavenly kingdom, she uprooted a pārijāta tree and placed it on the back of Garuḍa. Once Nārada had taken a pārijāta flower and presented it to Kṛṣṇa’s senior wife, Śrī Rukmiṇī-devī. On account of this, Satyabhāmā had developed an inferiority complex; she also wanted such a flower from Kṛṣṇa. Kṛṣṇa could understand the competitive womanly nature of His co-wives, and He had smiled. He had immediately asked Satyabhāmā, “Why are you asking for only one flower? I would like to give you a whole tree of pārijāta flowers.”

Actually, Kṛṣṇa had purposely taken His wife Satyabhāmā with Him so that she could collect the pārijāta with her own hand. But the denizens of the heavenly planets, including Indra, were very irritated. Without their permission, Satyabhāmā had uprooted a pārijāta tree, which is not to be found on the earth planet. Indra, along with other demigods, offered opposition to Kṛṣṇa and Satyabhāmā for taking away the tree, but in order to please His favorite wife Satyabhāmā, Kṛṣṇa became determined and adamant, so there was a fight between the demigods and Kṛṣṇa. As usual, Kṛṣṇa came out victorious, and He triumphantly brought the pārijāta tree chosen by His wife to this earth planet, to Dvārakā. After this, the tree was installed in the palace garden of Satyabhāmā. On account of this extraordinary tree, the garden house of Satyabhāmā became extraordinarily beautiful. As the pārijāta tree came down to the earthly planet, the fragrance of its flowers also came down, and the celestial drones migrated to this earth in search of their fragrance and honey.

King Indra’s behavior toward Kṛṣṇa was not very much appreciated by great sages like Śukadeva Gosvāmī. Out of His causeless mercy, Kṛṣṇa had gone to the heavenly kingdom, Amarāvatī, to present King Indra with his mother’s earrings, which had been lost to Bhaumāsura, and Indra had been very glad to receive them. But when a pārijāta tree from the heavenly kingdom was taken by Kṛṣṇa, Indra had fought with Him. This was self-interest on the part of Indra. He had offered his prayer, tipping down his head to the lotus feet of Kṛṣṇa, but as soon as his purpose had been served, he became a different creature. That is the way of the dealings of materialistic men. Materialistic men are always interested in their own profit. For this purpose they can offer any kind of respect to anyone, but when their personal interest is over, they are no longer friends. This selfish nature is found not only among the richer class of men on this planet but even in personalities like Indra and other demigods. Too much wealth makes a man selfish. A selfish man is not prepared to take to Kṛṣṇa consciousness and is condemned by great devotees like Śukadeva Gosvāmī. In other words, possession of too many worldly riches is a disqualification for advancement in Kṛṣṇa consciousness.

Source: Excerpt from Krishna Book, Chapter 59: The Deliverance of the Demon Bhaumāsura 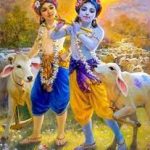 Why is Lord Krishna Blue?
Next Article 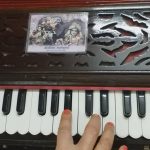