When it is necessary to create the material universe, the Supreme Personality of Godhead Vishnu (Krishna) first expansion Balarama (Sankarsana) expands Himself as the Maha-Vishnu (Purusa-avatar). The Lord Balarama is the brother of Krishna in the Vrindavana pastimes.

These created Consciousness/ living entities are then divided into three departmental activities according to the three gunas, or modes of material nature which include the mode of goodness, passion, and ignorance. The entire cosmic manifestation is a combination of all these modes. Krishna’s guna-avatar’s Brahma, Vishnu, and Shiva are the predominating deities of the three modes of material nature. Brahma (passion), Vishnu (goodness), and Shiva (ignorance). The second Purusa-avatar or incarnation of Vishnu is the Garbhodakasayi Vishnu (Maha-Vishnu expands His personality and enters each universe as Garbhodakasayi Vishnu), which enters into all the universe, spreads water from His body, and lies down on that water. From His navel, the stem of a lotus flower grows, and on that lotus flower the first creature, Brahma, is born. Within the stem of that lotus flower are fourteen divisions of planetary systems, which are created by Brahma. Within each universe, the Lord is present as the Garbhodakasayi Vishnu, and He maintains each universe and tends to its needs. Although He is within each material universe, the influence of material energy cannot touch Him.

The third Purusa-avatar of Vishnu is Ksirodakasayi Vishnu (Garbhodakasayi Vishnu expands as Kshirodakashayi Vishnu), who then expands Himself unlimitedly to enter the hearts of all the living entities in His particular universe. This expansion of Vishnu is known as Paramatma, the Supersoul, who accompanies each jiva soul in his search for material pleasure. Kshirodakashayi Vishnu is also an incarnation of the mode of goodness, and He resides on the ocean of milk within the universe. The scientific worldview of cosmic manifestation is quite different from the Vedantic view. However, the concept of time and space is extremely important in both science and Vedanta. In a materialistic worldview, the time has a beginning and cosmologists say that time started along with the so-called Big Bang theory.

This is the conceptual framework regarding the beginning of our universe according to the opinion of modern cosmologists. According to this theory, our universe began around thirteen to fifteen billion (13-15 * 109) years ago. According to Vedanta, Kala or time has no beginning. It is eternal and the impersonal aspect of the Supreme Being. Lord Sri Krishna says in Bhagavad-gita (11.32), kalo ‘smi, “Time I am”. Thus, in a spiritual worldview, the time has no beginning and no end, and it has been existing eternally. According to Vedanta, all the material universes have manifested because of Big Vision and not by a Big Bang. All these manifestations have a beginning as well as an end. This is the symptom of material nature.

Just like all our material bodies have a beginning and also have an end. The creation and annihilation go on in cycles just like the changes of the seasons. The Vedantic cosmology describes that at the beginning of each cycle of creation of the universe, Lord Brahma, the first created cosmic living being is born. A day of Brahma is called a Kalpa and one Kalpa consists of a thousand cycles of four yugas, or ages called Satya, Treta, Dvapara, and Kali. The same number comprises one night of Brahma and he lives one hundred of such years and then dies.

Satyayuga lasts 1,728,000 years; Tretayuga lasts 1,296,000 years; Dvaparayuga lasts 864,000 years and Kaliyuga lasts 432,000 years. Thus one hundred years of Lord Brahma equal to 311 trillion and 40 billion earth years. According to Vedantic cosmology, our universe starts with the birth of Lord Brahma and he is at present a little more than 50 years old. The present period is 5,000 years in the Kaliyuga of the twenty-eighth four-yuga cycle of the seventh Manu of the first Kalpa of the first day of Brahma in the second half of his life. Hence, our present universe started about 155.522 trillion (155.522 * 1012) years ago and will end in 155. 518 trillion (155.518 * 1012) years and just after that a new cycle of creation will begin again. At the end of the millennium, Brahma begins to enter into the Personality of Godhead Lord Narayana [Maha-Vishnu] along with all creative elements. (Bg.1.6.29).

The merging of living beings into the body of Maha-Vishnu takes place automatically at the end of Brahma’s one hundred years. But that does not mean that the individual living being loses his identity. The identity is there, and as soon as there is another creation by the will of the Supreme Lord, all the sleeping, inactive living beings are again let loose to begin their activities in the continuation of past different spheres of life. (Bg. 1.10.21, Purport). 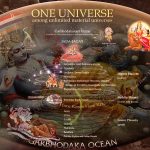 What are the four Yugas (Ages)?
Next Article 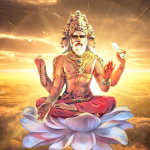 What is the life span of Brahma?
Leave a comment