Garuda said, “ Heavenly enjoyment, worldly pleasure, strength, health, and bravery are acquired by men on the strength of their pious activities. These are the gifts awarded to virtuous persons. Virtue triumphs, not evil . Truth triumphs, not falsehood. Forgiveness is victorious, not anger. Lord Vishnu conquers, not the demons.”

“I have understood that everything auspicious results from virtue. When our pious credits are at the peak , we become devoted to Lord Krishna. O Lord, I now want to know— by what actions do persons attain sinful births?

Lord Krishna said, “O Garuda, listen carefully as I explain how men derive their particular traits from their previous activities. After being punished in hell, sinful persons again attain a human birth with the characteristic traits of their sins. In other words, sinful men who were punished in hell, after once again attaining a human birth on earth, are marked with
characteristic signs of their past sins. ”

“One who was a habitual liar is born with a speech defect so that he stammers, or perhaps he is born dumb. One who had killed a brahmana is born as a leper, or with tuberculosis. A drunkard is born as a person with black teeth. One who had stolen gold has bad nails. One who had intimate relations with
his preceptor’s wife has a skin disease. One who had associated with sinful people is born in a low family. ”

“One who raped an immature girl becomes a serpent. One who coveted his preceptor’s wife becomes a lizard. One who interfered with the flow of water becomes a fish. One who deceived a woman becomes an owl. One who did not make a promised donation to a brahmana becomes a jackal. One who had blasphemed brahmanas becomes a tortoise. One who maintained himself by worshipping deities becomes a chandala.”

“One who kept a shudra woman becomes a bull. One who kicked the sacred fire becomes a cat. One who indulged in sex at an improper time becomes a eunuch. One who had stolen perfume becomes a person with a foul odour.”

“O Garuda, these are the signs whereby a person’s past sins can be ascertained.” 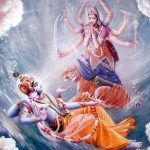 The Real Understanding of Navaratri
Next Article