TRANSLATION
O Pārtha, how can a person who knows that the soul is indestructible, eternal, unborn and immutable kill anyone or cause anyone to kill?

PURPORT
Everything has its proper utility, and a man who is situated in complete knowledge knows how and where to apply a thing for its proper utility. Similarly, violence also has its utility, and how to apply violence rests with the person in knowledge. Although the justice of the peace awards capital punishment to a person condemned for murder, the justice of the peace cannot be blamed, because he orders violence to another person according to the codes of justice. In Manu-saṁhitā, the lawbook for mankind, it is supported that a murderer should be condemned to death so that in his next life he will not have to suffer for the great sin he has committed. Therefore, the king’s punishment of hanging a murderer is actually beneficial. Similarly, when Kṛṣṇa orders fighting, it must be concluded that violence is for supreme justice, and thus Arjuna should follow the instruction, knowing well that such violence, committed in the act of fighting for Kṛṣṇa, is not violence at all because, at any rate, the man, or rather the soul, cannot be killed; so for the administration of justice, so-called violence is permitted. A surgical operation is not meant to kill the patient, but to cure him. Therefore the fighting to be executed by Arjuna at the instruction of Kṛṣṇa is with full knowledge, so there is no possibility of sinful reaction.

TRANSLATION
As a person puts on new garments, giving up old ones, the soul similarly accepts new material bodies, giving up the old and useless ones.

PURPORT
Change of body by the atomic individual soul is an accepted fact. Even the modern scientists who do not believe in the existence of the soul, but at the same time cannot explain the source of energy from the heart, have to accept continuous changes of body which appear from childhood to boyhood and from boyhood to youth and again from youth to old age. From old age, the change is transferred to another body. This has already been explained in a previous verse (2.13).

Transference of the atomic individual soul to another body is made possible by the grace of the Supersoul. The Supersoul fulfills the desire of the atomic soul as one friend fulfills the desire of another. The Vedas, like the Muṇḍaka Upaniṣad, as well as the Śvetāśvatara Upaniṣad, compare the soul and the Supersoul to two friendly birds sitting on the same tree. One of the birds (the individual atomic soul) is eating the fruit of the tree, and the other bird (Kṛṣṇa) is simply watching His friend. Of these two birds—although they are the same in quality—one is captivated by the fruits of the material tree, while the other is simply witnessing the activities of His friend. Kṛṣṇa is the witnessing bird, and Arjuna is the eating bird. Although they are friends, one is still the master and the other is the servant. Forgetfulness of this relationship by the atomic soul is the cause of one’s changing his position from one tree to another, or from one body to another. The jīva soul is struggling very hard on the tree of the material body, but as soon as he agrees to accept the other bird as the supreme spiritual master—as Arjuna agreed to do by voluntary surrender unto Kṛṣṇa for instruction—the subordinate bird immediately becomes free from all lamentations. Both the Muṇḍaka Upaniṣad (3.1.2) and Śvetāśvatara Upaniṣad (4.7) confirm this:

“Although the two birds are in the same tree, the eating bird is fully engrossed with anxiety and moroseness as the enjoyer of the fruits of the tree. But if in some way or other he turns his face to his friend who is the Lord and knows His glories—at once the suffering bird becomes free from all anxieties.” Arjuna has now turned his face towards his eternal friend, Kṛṣṇa, and is understanding the Bhagavad-gītā from Him. And thus, hearing from Kṛṣṇa, he can understand the supreme glories of the Lord and be free from lamentation.

Arjuna is advised herewith by the Lord not to lament for the bodily change of his old grandfather and his teacher. He should rather be happy to kill their bodies in the righteous fight so that they may be cleansed at once of all reactions from various bodily activities. One who lays down his life on the sacrificial altar, or in the proper battlefield, is at once cleansed of bodily reactions and promoted to a higher status of life. So there was no cause for Arjuna’s lamentation. 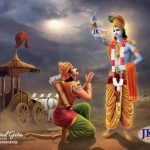 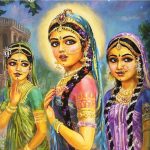