Thereafter, Lord Shiva requested Lord Janardana to describe in detail the process of creation. A brief summary of the Lord’s explanation is herein given:

From passion—hunger, darkness and anger evolved.

From Brahma’s head came the brahmanas. From his arms—the kshatriyas. From his thighs were born the vaishyas and from his feet—the shudras.

Staunch brahmachariescanattain Brahmaloka, householders who are steady in the performance of their duties can attain the realm of the Prajapatis. Vanaprasthas can attain the world of the seven rishis and sannyasis can attain liberation in Brahman.

From his right thumb, Lord Brahma created Daksha, and from his left thumb, he created Daksha’s wife. Daksha begot many daughters who were given in marriage to Brahma’s sons. Sati was given to Rudra. Rudra’s sons were numerous and very powerful. He gave his daughter, Khyati, to Bhrigu Muni, who begot in her Dhatri, Vidhatri and Shri, the wife of Lord Narayana. From Shri, the Lord begot Bala and Unmada.

Manu’s daughters, Ayati and Niyati, became the wives of Dhatri and Vidhatri, and their two sons were Prana and Mrikandu, whose son was Markandeya Rishi.

Kama’s wife was Rati (love) and their son was Harsha (joy). The Garuda Purana goes on to list innumerable descendants of Daksha’s daughters.

Thereafter, during the course of a lengthy description of procedures for worshiping Lord Vishnu, Lord Rudra asked, “My dear Lord, what is to be recited by a man so that he can become liberated from the terrible ocean of material existence? O Janardana, please tell me the great recitation that brings all auspiciousness.” 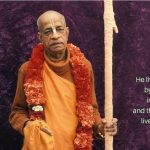 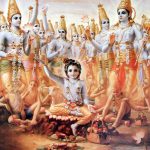