After Vasudeva adjusted things as they had been before he carried Kṛṣṇa to Gokula, and all the doors and gates became similarly closed, the gatekeepers awoke and heard the newborn child crying. Kaṁsa was waiting to hear the news of the child’s birth, and the gatekeepers immediately approached him and informed him that the child was born. At that time, Kaṁsa got up from his bed very quickly and exclaimed, “Now the cruel death of my life is born!” Kaṁsa became perplexed now that his death was approaching, and his hair scattered. Immediately he proceeded toward the place where the child was born.

Devakī, on seeing her brother approaching, prayed in a very meek attitude to Kaṁsa: “My dear brother, please do not kill this female child. I promise that this child will be the wife of your son; therefore don’t kill her. You are not to be killed by any female child. That was the prophecy. You are to be killed by a male child, so please do not kill her. My dear brother, you have killed so many of my children who were just born, shining like the sun. That is not your fault. You have been advised by demoniac friends to kill my children. But now I beg you to excuse this girl at least. Let her live as my daughter.”

Kaṁsa was so cruel that he did not listen to the pitiful prayers of his sister Devakī. He forcibly grabbed the newborn child to rebuke his sister and attempted to dash her on the stone mercilessly. This is a graphic example of a cruel demon who could sacrifice all relationships for the sake of personal gratification. But the child immediately slipped out of his hands, went up into the sky and appeared with eight arms as the younger sister of Viṣṇu. She was decorated with nice garments and flower garlands and ornaments; in her eight hands she held a bow, lance, arrows, sword, conchshell, disc, club and shield.

Seeing the appearance of the child (who was actually the goddess Durgā), all the demigods from different planets like Siddhaloka, Cāraṇaloka, Gandharvaloka, Apsaroloka, Kinnaraloka and Uragaloka presented her with various articles and began to offer their respective prayers. From above, the goddess addressed Kaṁsa: “You rascal, how can you kill me? The child who will kill you is already born before me somewhere within this world. Don’t be so cruel to your poor sister.” After this appearance, the goddess Durgā became known by various names in various parts of the world. 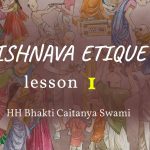 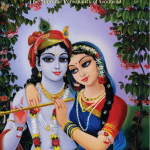 KB 5 – The Meeting of Nanda and Vasudeva
Leave a comment