Brahma was born from the lotus that sprouted from the navel of Garbhodakasayi Visnu. Brahma is known as the grandfather of everyone and the original progenitor.

When the material world was submerged within water during the Sveta-varaha kalpa, Brahma was created from the navel of Lord Visnu.

After Brahma was born, he could not see or understand anything. He wondered, “Who am I? Who is the original creator? From where have I come?”

Being unable to find the answer to these questions, Brahma spent one thousand years in meditation. Finally, he heard the two syllables, “ta” and “pa” being vibrated, and so he decided that to realize the original Personality of Godhead, he much perform austerity. Thus, he underwent severe austerities for one thousand years.

Being pleased by the penance of Brahma, the Lord appeared before him and entrusted him with the responsibility of creating the material universe. Thereafter, Brahma created many sages, introspective personalities, and the progenitors, and he engaged them in carrying out the universal affairs. He also instructed them to meditate and perform austerities.

After some time, Brahma desired that there should be further creation by the combination of man and woman. Immediately, Manu and his wife, Satarupa, were created from his mind. Gradually, by the combined effort of Manu and Satarupa, two sons, Priyavrta and Utthanapada, as well as three daughters, Akuti, Prasuti and Devahuti were born. In due course of time these sons and daughters were married to suitable partners. In this way, the act of creation gradually progressed, by the direction of Brahma.

Being situated in such a high position, Brahma gradually began to forget the Supreme Lord, because of his false ego. He became puffed-up by material pride and considered himself to be the doer, the enjoyer, and the creator. When Krsna appeared in this world, at the end of Dvapara-yuga, Brahma considered Krsna to be an ordinary human being, the son of a cowherd. Thinking in this way, he came to Braja, to test Him.

On that day, Krsna, along with His friends, had gone to the pasturing ground to tend the cows. After leaving the cows to graze, Krsna and His friends began to enjoy a picnic in the forest and in this way, they forgot about the cows. Suddenly, while eating rice mixed with yogurt, one of the cowherd boys said, “O Krsna!Where are our cows? I can’t see them. Let us go and find them.”

Krsna replied, “You all wait here while I go and bring the cows. You all enjoy your lunch in the meantime.”

After saying this, Krsna began to look for the cows. At this time, Brahma kidnapped all of the cows and cowherd boys. After keeping them within a cave, he returned to his abode. Krsna soon realized that this was an act of Brahma, and so He instantly created the same number of cows, calves and cowherd boys, and then returned home.

On that particular day, Krsna’s elder brother, Balarama, was not with Him. All of the cows, calves and cowherd boys then returned to their respective homes. Normally, when Krsna returned home from the forest in the evening, all of the inhabitants of Braja would rush to the house of Nanda Maharaja, just to have a glimpse of Krsna. But, on that day, no one came, because they were all busy with their own cows and sons.

One day, Balarama asked, “Tell me Krsna, for the last few days, I am noticing something new. Have you created some kind of illusion? Why does no one come running to see You any more? Everyone seems to be happily engaged with their own children and cows. Has something happened in the forest? It appears to Me that all these cowherd boys and calves are non-different from You.”

After hearing this, Krsna revealed the entire incident to Balarama. In this way, one full year passed. Meanwhile, a doubt appeared in Brahma’s mind and so he returned to Earth and saw that all the cowherd boys and cows were with Krsna as before. He then went to the cave to see what had happened to the hidden cows, calves and cowherd boys. He thus became struck with wonder when he saw them all there.

He thought, “All these cows and calves are still here, and yet Krsna regularly goes to the pasturing ground with these same cows, calves and cowherd boys. Is this some kind of illusion or magic?” After contemplating in this way, Brahma could finally realize that Sri Krsna is directly the Supreme Personality of Godhead, and that whatever had happened was because of the influence of His external energy.

Brahma thought to himself, “I have committed an offense at the Lord’s lotus feet, and I have been suitably punished. Now, it is my duty to fall at His lotus feet and beg for pardon.”

Thinking in this way, Brahma traveled through the sky and arrived at Braja. He fell flat, like a stick, at the lotus feet of Sri Krsna and began to offer wonderful prayers. The Supreme Lord became very pleased by his prayers, and after blessing Brahma, He returned to His residence.

The False Ego of Lord Brahma

This was not the first time that Brahma had committed such a mistake. He does so, again and again. Once, when Brahma was puffed-up with false ego because of being the creator, the Supreme Lord, desiring to smash his pride, invited this four-headed Brahma to a huge assembly.

Brahma always thinks that he is the proprietor of this universe. By his will, all moving and nonmoving living entities are created. In this universe, there is no second creator like him. So, to remove this mundane mentality of Brahma, Lord Krsna invited many Brahmas, from innumerable universes, having six heads, ten heads, twenty heads, one hundred heads and even one thousand heads.

Among all the universes, this one with only fourteen planetary systems is the smallest. The fourheaded Brahma is the creator of this smallest universe. Brahmas with hundreds and thousands of heads arrived there and began offering obeisances at the lotus feet of the Lord. Each Brahma thought that he alone was summond by the Lord.

The four-headed Brahma began to think, “From where have all these Brahmas come? I am the creator of this universe. Besides this one, are there many more universes?“

After inquiring about the well being of all the Brahmas, Lord Krsna said to the four-headed Brahma, who felt himself to be most insignificant, “O Brahma, what are you thinking? Please tell me everything.”

Brahma replied, “My dear Lord, my illusion has been dispelled. I am very proud. I could not understand that there are many persons superior to me. Now, I have realized that there are millions of universes besides this universe, consisting of fourteen planetary systems. Since I dwell in the smallest of them, my mentality is also tiny and abominable. Kindly take away all my pride and award me pure devotional service at Your lotus feet.”
The Supreme Lord said, “O unborn one, just to remove your false ego, I had invited all of these Brahmas. May you attain all auspiciousness.” Brahma then returned to his own abode,Satyaloka, while thinking about his offense to the Lord.

Lord Brahma gets cursed by the Brahmanas

Brahma has two wives- Savitri and Gayatri. There is a nice story in the Padma Purana about Brahma’s marriage to Gayatri. One day, Brahma decided to perform a sacrifice. It was the custom that a sacrifice should be performed along with one’s wife. But, in spite of receiving repeated messages, Brahma’s first wife, Savitri, did not come on time to the sacrificial arena. She was very busy with household duties.

The auspicious time for performing the sacrifice was passing and so the priest reminded Brahma about I he necessity for his wife’s presence. Being unhappy with Savitri, Brahma ordered Indra, the King of heaven, to find a new wife for him. Indra wandered over the Earth, looking for a new bride for Brahma, when suddenly he saw a cowherd girl of great beauty.

By making inquiries, King Indra learned that the girl was the daughter of a cowherd, and that her duty was to sell milk, yogurt and butter. Indra then brought the girl and offered her to Brahma. This cowherd girl, Gayatri, was exquisitely beautiful. Her complexion was golden and she was as effulgent as the goddess of fortune. Her eyes resembled lotus flowers and her toenails shone brightly.

As soon as Brahma saw her, he became attracted, desiring to enjoy her intimate association. The girl was also attracted and she expressed the desire to offer herself in his service.Brahma then requested Lord Visnu to quickly conduct the sacrifice. According to the advice of Lord Visnu, Brahma married Gayatri in the Gandharva style (simply by agreement).

After the sacrifice was completed, Brahma was cursed that the brahmanas would never worship him, except once a year, during the month of Karttika. After this curse had been pronounced, Lord Visnu and Siva took over the performance of the sacrifice.

When Brahma was engaged in creating progeny, he ordered the Prajapatis to assist him. At that time, the great sage, Narada muni, convinced the children born of these Prajapatis to renounce the household ashrama and go to the forest. This made Brahma very angry, and so he cursed Narada.

Narada took the curse of Brahma as a blessing, and began to travel throughout the universe. In exchange, Narada also cursed Brahma, saying, “Even though you are the grandfather of all the inhabitants within this universe, no one will worship you.”

After speaking these words, Narada disappeared from view. Since then, except at Puskara, the deity of Brahma is not worshiped anywhere. 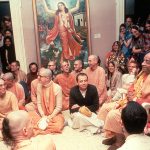 What is Satsanga | Srila Prabhupada
Next Article