Capital punishment is the state’s ultimate act of reprisal, and no sacrifice surpasses offering one’s life for the sake of others. But although we seemingly attach great value to life, each year in America hundreds of millions of defenseless animals are butchered. This wholesale slaughter of animals is not necessary to prevent us from starving. Moreover, it is economically extravagant and ethically reprehensible. Most seriously, however, animal killing violates of the universal law of karma, which is similar to the modern scientific principle of action and reaction.

Scientists clearly understand how the physical law of action and reaction (“for every action there is an equal and opposite reaction“) applies to material objects, but most are unaware of the more subtle law of action and reaction in the realm of consciousness. Nevertheless, we do have a kind of instinctive awareness that somehow we all create our own happiness and distress. This realization dawns upon us when in response to some mishap we reflect, “Well, maybe I had that coming to me.”

In fact, we sometimes find people jokingly attributing unfortunate occurrences in their lives to “bad karma.” But the law of karma, like any other law, is ultimately no joking matter. It operates impartially and unerringly, awarding us exactly what we deserve. Specifically, the law of karma insures that those who cause violence and suffering to other living beings must themselves experience equivalent violence and suffering-immediately or in the future.

Karma, as many in the West now know, is intimately related with the principle of reincarnation. In India’s greatest spiritual classic, Bhagavad-gītā, Lord Kṛṣṇa describes the soul as the source of consciousness and the active principle that animates the body of every living being. This vital force, which is of the same spiritual quality in all beings, is distinct from and superior to the matter comprising the temporary material form. At the time of death, the indestructible soul transmigrates into another physical body, just as one changes clothing. All living beings (not just a few select individuals) undergo this process of reincarnation, lifetime after lifetime. The Bhagavad-gītā states, 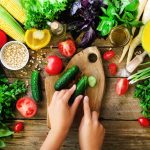 Is Killing Vegetables Wrong?
Next Article 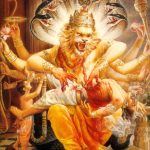