TRANSLATION
That which the Vedāntists describe as unmanifest and infallible, that which is known as the supreme destination, that place from which, having attained it, one never returns—that is My supreme abode.

PURPORT
The supreme abode of the Personality of Godhead, Kṛṣṇa, is described in the Brahma-saṁhitā as cintāmaṇi-dhāma, a place where all desires are fulfilled. The supreme abode of Lord Kṛṣṇa, known as Goloka Vṛndāvana, is full of palaces made of touchstone. There are also trees, called “desire trees,” that supply any type of eatable upon demand, and there are cows, known as surabhi cows, which supply a limitless supply of milk. In this abode, the Lord is served by hundreds of thousands of goddesses of fortune (Lakṣmīs), and He is called Govinda, the primal Lord and the cause of all causes. The Lord is accustomed to blow His flute (veṇuṁ kvaṇantam). His transcendental form is the most attractive in all the worlds—His eyes are like lotus petals, and the color of His body is like the color of clouds. He is so attractive that His beauty excels that of thousands of Cupids. He wears saffron cloth, a garland around His neck and a peacock feather in His hair. In the Bhagavad-gītā Lord Kṛṣṇa gives only a small hint of His personal abode, Goloka Vṛndāvana, which is the supermost planet in the spiritual kingdom. A vivid description is given in the Brahma-saṁhitā. Vedic literatures (Kaṭha Upaniṣad 1.3.11) state that there is nothing superior to the abode of the Supreme Godhead, and that that abode is the ultimate destination (puruṣān na paraṁ kiñcit sā kāṣṭhā paramā gatiḥ). When one attains to it, he never returns to the material world. Kṛṣṇa’s supreme abode and Kṛṣṇa Himself are nondifferent, being of the same quality. On this earth, Vṛndāvana, ninety miles southeast of Delhi, is a replica of that supreme Goloka Vṛndāvana located in the spiritual sky. When Kṛṣṇa descended on this earth, He sported on that particular tract of land known as Vṛndāvana, comprising about eighty-four square miles in the district of Mathurā, India.

TRANSLATION
The Supreme Personality of Godhead, who is greater than all, is attainable by unalloyed devotion. Although He is present in His abode, He is all-pervading, and everything is situated within Him.

PURPORT
It is here clearly stated that the supreme destination, from which there is no return, is the abode of Kṛṣṇa, the Supreme Person. The Brahma-saṁhitā describes this supreme abode as ānanda-cinmaya-rasa, a place where everything is full of spiritual bliss. All the variegatedness manifest there is of the quality of spiritual bliss—nothing there is material. That variegatedness is expanded as the spiritual expansion of the Supreme Godhead Himself, for the manifestation there is totally of the spiritual energy, as explained in Chapter Seven. As far as this material world is concerned, although the Lord is always in His supreme abode, He is nonetheless all-pervading by His material energy. So by His spiritual and material energies He is present everywhere—both in the material and in the spiritual universes. Yasyāntaḥ-sthāni means that everything is sustained within Him, within either His spiritual or material energy. The Lord is all-pervading by these two energies.

To enter Kṛṣṇa’s supreme abode or the innumerable Vaikuṇṭha planets is possible only by bhakti, devotional service, as clearly indicated here by the word bhaktyā. No other process can help one attain that supreme abode. The Vedas (Gopāla-tāpanī Upaniṣad 1.21) also describe the supreme abode and the Supreme Personality of Godhead. Eko vaśī sarva-gaḥ kṛṣṇaḥ. In that abode there is only one Supreme Personality of Godhead, whose name is Kṛṣṇa. He is the supreme merciful Deity, and although situated there as one He has expanded Himself into millions and millions of plenary expansions. The Vedas compare the Lord to a tree standing still yet bearing many varieties of fruits, flowers and changing leaves. The plenary expansions of the Lord who preside over the Vaikuṇṭha planets are four-armed, and they are known by a variety of names—Puruṣottama, Trivikrama, Keśava, Mādhava, Aniruddha, Hṛṣīkeśa, Saṅkarṣaṇa, Pradyumna, Śrīdhara, Vāsudeva, Dāmodara, Janārdana, Nārāyaṇa, Vāmana, Padmanābha, etc.

The Brahma-saṁhitā (5.37) also confirms that although the Lord is always in the supreme abode, Goloka Vṛndāvana, He is all-pervading, so that everything is going on nicely (goloka eva nivasaty akhilātma-bhūtaḥ). As stated in the Vedas (Śvetāśvatara Upaniṣad 6.8), parāsya śaktir vividhaiva śrūyate/ svābhāvikī jñāna-bala-kriyā ca: [Cc. Madhya 13.65, purport] His energies are so expansive that they systematically conduct everything in the cosmic manifestation without a flaw, although the Supreme Lord is far, far away. 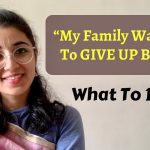 What To Do If Family Doesn’t Support Our Bhakti?
Leave a comment