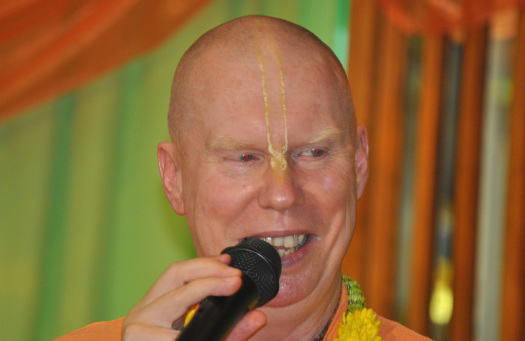 Then Bhakti Caitanya Swami moved to South Africa, where, from 1980 to 1982, he served as temple president in the rural community of Cato Ridge. Thereafter he did fund raising for the building of the Temple of Understanding in Durban, which opened in 1985. This extraordinary temple combines modern design with traditional Vedic architecture and is one of South Africa’s landmarks. Hundreds of thousands of pilgrims and tourists visit each year.

From 1985 until 1988 Bhakti Caitanya Swami served as regional secretary for South Africa, and he then participated in an outreach project in Johannesburg from 1988 until 1991. From that time until now, Bhakti Caitanya Swami is mostly engaged in traveling and spreading Krsna consciousness in an authoritative and accessible way. His permanent base is Durban, where his gentle and saintly presence provides stability.

His special interests include filming, photography, and parikrama (visiting holy places of deep spiritual import). The splendid outcome of these interests can be seen in the impressive series of appealing documentaries of holy pilgrimages in India and festivals around the world and in books such as Vrindavan: The Playground of God and Traveling in the Service of Srila Prabhupada, Volumes 1, 2 and 3.

Keep up with Bhakti Caitanya Swami and his disciples on Facebook www.facebook.com/bcswami

Back to Glossary Index Page

By Radhika Raman Das
Follow:
Raman (Radhika Raman Das) joined ISKCON in 2003 and got initiated by HH Bhakti Caitanya Swami Maharaj in 2011. As the Editor in Chief at "The Vaisnava - Online Magazine", he helps readers around the world hone in their Spiritual Curiosity, express their unique realizations as aspiring Vaisnava writers and enthusiasts, as well as to spread the digital seed of Srila Prabhupada's mission to spread Krishna Consciousness all around the globe.
Previous Article Lokanath Swami
Next Article Agastya Muni
Leave a comment