Srila Prabhupada says, “in the early morning hours (known as brahma-muhurta) one should get up”

The brahma-muhurta is generally accepted as the most auspicious time of the day to perform spiritual practices. During this time of day the world is peaceful and the influence of the modes of passion and ignorance are less thus enabling us to focus more on our spiritual practices. The brahma-muhurta begins approximately one and a half hours before sunrise. Although this may be difficult for some devotees, due to pressures of work etc., rising early and regulation are beneficial for the development of spiritual life. If you cannot rise this early it is still good to rise as early as possible and at the same time everyday.
In the Bhagavad-gita Lord Krsna says,

He who is regulated in his habits of eating, sleeping, recreation and work can mitigate all material pains by practicing the yoga system.

Leading a regulated life helps us to overcome the influence of the modes of material nature and thus be situated in a position more conducive to developing transcendental consciousness.

Concerning pratah-smrti, remembrance of the Lord in the morning, in the early morning hours (known as brahma-muhurta) one should get up and immediately chant the Hare Krsna mantra, or at least ‘Krsna, Krsna, Krsna’. In this way, one should remember Krsna. Some slokas or prayers should also be chanted. By chanting, one immediately becomes auspicious and transcendental to the infection of material qualities. Actually one has to chant and remember Lord Krsna twenty-four hours daily, or as much as possible When you wake up in the morning, you should chant the name of the Lord. This helps to clear the consciousness of the influences of sleep or any bad dreams you may have experienced during the night. You can chant the names of the deities you are worshiping or the Hare Krsna maha-mantra. In the purport to Caitanya-caritamrta, Madhya 24.331 Srila Prabhupada says,

Krsna is the origin of Lord Visnu. He should always be remembered and never forgotten at any time. All the rules and prohibitions mentioned in the sastras should be the servants of these two principles. [Padma Purana, from the portion called Brhat-sahasra-nama-stotra.] 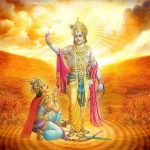 3. What does the Bhagavad-Gita teach?
Next Article 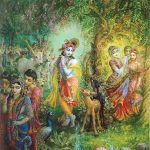