TRANSLATION
Persons who are actually intelligent and philosophically inclined should endeavor only for that purposeful end which is not obtainable even by wandering from the topmost planet [Brahmaloka] down to the lowest planet [Pātāla]. As far as happiness derived from sense enjoyment is concerned, it can be obtained automatically in course of time, just as in course of time we obtain miseries even though we do not desire them.

PURPORT
Every man everywhere is trying to obtain the greatest amount of sense enjoyment by various endeavors. Some men are busy engaged in trade, industry, economic development, political supremacy, etc., and some of them are engaged in fruitive work to become happy in the next life by attaining higher planets. It is said that on the moon the inhabitants are fit for greater sense enjoyment by drinking soma-rasa, and the Pitṛloka is obtained by good charitable work. So there are various programs for sense enjoyment, either during this life or in the life after death. Some are trying to reach the moon or other planets by some mechanical arrangement, for they are very anxious to get into such planets without doing good work. But it is not to happen. By the law of the Supreme, different places are meant for different grades of living beings according to the work they have performed. By good work only, as prescribed in the scriptures, can one obtain birth in a good family, opulence, good education and good bodily features. We see also that even in this life one obtains a good education or money by good work. Similarly, in our next birth we get such desirable positions only by good work. Otherwise, it would not so happen that two persons born in the same place at the same time are seen differently placed according to previous work. But all such material positions are impermanent. The positions in the topmost Brahmaloka and in the lowest Pātāla are also changeable according to our own work. The philosophically inclined person must not be tempted by such changeable positions. He should try to get into the permanent life of bliss and knowledge where he will not be forced to come back again to the miserable material world, either in this or that planet. Miseries and mixed happiness are two features of material life, and they are obtained in Brahmaloka and in other lokas also. They are obtained in the life of the demigods and also in the life of the dogs and hogs. The miseries and mixed happiness of all living beings are only of different degree and quality, but no one is free from the miseries of birth, death, old age and disease. Similarly, everyone has his destined happiness also. No one can get more or less of these things simply by personal endeavors. Even if they are obtained, they can be lost again. One should not, therefore, waste time with these flimsy things; one should only endeavor to go back to Godhead. That should be the mission of everyone’s life.

TRANSLATION
Lord Ṛṣabhadeva told His sons: My dear boys, of all the living entities who have accepted material bodies in this world, one who has been awarded this human form should not work hard day and night simply for sense gratification, which is available even for dogs and hogs that eat stool. One should engage in penance and austerity to attain the divine position of devotional service. By such activity, one’s heart is purified, and when one attains this position, he attains eternal, blissful life, which is transcendental to material happiness and which continues forever.

PURPORT
In this verse Lord Ṛṣabhadeva tells His sons about the importance of human life. The word deha-bhāk refers to anyone who accepts a material body, but the living entity who is awarded the human form must act differently from animals. Animals like dogs and hogs enjoy sense gratification by eating stool. After undergoing severe hardships all day, human beings are trying to enjoy themselves at night by eating, drinking, having sex and sleeping. At the same time, they have to properly defend themselves. However, this is not human civilization. Human life means voluntarily practicing suffering for the advancement of spiritual life. There is, of course, suffering in the lives of animals and plants, which are suffering due to their past misdeeds. However, human beings should voluntarily accept suffering in the form of austerities and penances in order to attain the divine life. After attaining the divine life, one can enjoy happiness eternally. After all, every living entity is trying to enjoy happiness, but as long as one is encaged in the material body, he has to suffer different kinds of misery. A higher sense is present in the human form. We should act according to superior advice in order to attain eternal happiness and go back to Godhead.

It is significant in this verse that the government and the natural guardian, the father, should educate subordinates and raise them to Kṛṣṇa consciousness. Devoid of Kṛṣṇa consciousness, every living being suffers in this cycle of birth and death perpetually. To relieve them from this bondage and enable them to become blissful and happy, bhakti-yoga should be taught. A foolish civilization neglects to teach people how to rise to the platform of bhakti-yoga. Without Kṛṣṇa consciousness a person is no better than a hog or dog. The instructions of Ṛṣabhadeva are very essential at the present moment. People are being educated and trained to work very hard for sense gratification, and there is no sublime aim in life. A man travels to earn his livelihood, leaving home early in the morning, catching a local train and being packed in a compartment. He has to stand for an hour or two in order to reach his place of business. Then again he takes a bus to get to the office. At the office he works hard from nine to five; then he takes two or three hours to return home. After eating, he has sex and goes to sleep. For all this hardship, his only happiness is a little sex. Yan maithunādi-gṛhamedhi-sukhaṁ hi tuccham [SB 7.9.45]. Ṛṣabhadeva clearly states that human life is not meant for this kind of existence, which is enjoyed even by dogs and hogs. Indeed, dogs and hogs do not have to work so hard for sex. A human being should try to live in a different way and should not try to imitate dogs and hogs. The alternative is mentioned. Human life is meant for tapasya, austerity and penance. By tapasya, one can get out of the material clutches. When one is situated in Kṛṣṇa consciousness, devotional service, his happiness is guaranteed eternally. By taking to bhakti-yoga, devotional service, one’s existence is purified. The living entity is seeking happiness life after life, but he can make a solution to all his problems simply by practicing bhakti-yoga. Then he immediately becomes eligible to return home, back to Godhead. As confirmed in Bhagavad-gītā (4.9):

“One who knows the transcendental nature of My appearance and activities does not, upon leaving the body, take his birth again in this material world, but attains My eternal abode, O Arjuna.” 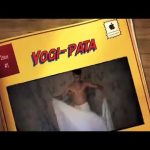 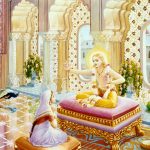