Can Krishna and Guru be found within one’s heart? | By Gauragopala Dasa

Can Krishna and Guru be found within one’s heart? Then sent to find you, no matter where you are?

Is it offensive to think of Krishna’s Pastimes while chanting?

I remember the amazing story of a boy who went into an old Cathedral in Melbourne on February 18th 1972 to desperately pray to God within his own heart and within the Church for guidance and direction, crying out within, ‘Oh my Lord, please show me the way’.

He had entered that church in a totally helpless condition, prayed, and begged to God to ‘please’ show him the way. He felt totally useless and lost in this world and believed no one on the planet has any real understanding of Spiritual life. He had experienced so many from Christianity, TM, Yogananda, Kahlil Gibran, Mere Baba, and Timothy Leary to Lennon. But something was missing.

What could he do? Who could he turn too as a ‘personal’ guide? He tried so many paths, realizing he was not enlightened enough to just accept God in the heart as his only Guru and guide, he needed someone to be there embodied right in front of him.

He new so many people were already his Guru’s or teacher by showing him so many tasks from day to day in different fields, but there was still something missing, he never had a initiating Spiritual Mater.

There was something not quite right. Something that Books just could never give him that would help him advance to the next stage of Spiritual re-establishment. He needed that personal touch to eulogize the teachings of God he was searching for within his own heart.

So here he was, on his hands and knees in this marvellous old Cathedral praying for guidance, for leadership, for association, for a Spiritual Master. It was during those prayers he heard this low pitched mumbling sound; he looked up and saw a devotee of Krsna standing there looking at religious artefacts. Something just fell into place for this young boy, call it intuition or whatever, but he new that God in the heart had answered his prayer for the ‘personal embodied guidance’ that he desperately needed.

What’s more, the power of God in his heart was a truly amazing experience, that seemed unbelievable, or more to the point, no less than a miracle.

The young Krsna devotee had left a magazine on the seat; the boy picked it up, found where the Temple was and left the Cathedral knowing exactly what to. The date was February 18 1972.

On arriving at the Temple, he found a festive atmosphere; it was the Appearance day of Lord Caitanya Mahaprabhu. Some will say that was a coincidence however, this boy knew from deep within his heart, it was Krsna IN the heart directing him to the most auspicious day of the Vaishnava calendar.

The young boy shaved up that day and moved into the Temple. A week and a half later His Divine Grace AC Bhaktivedanta Swami Prabhupada arrived in Melbourne. With tears in eye, the young boy presented Srila Prabhupada with a beautiful red rose at the Melbourne Airport.

This boy also was previously convinced before entering the Cathedral, that an embodied guru just doesn’t exist. He had now realized that Krsna is in the heart can do anything, even put an elephant through the eye of a needle Why not? He is God This means if one looks deep enough within their own heart, believing it necessary to have an embodied Guru instructing them as a prominent initiating teacher above all others, then Krsna, from within the heart, will direct a bonafide Guru to you, WITHOUT A DOUBT.

Remember, the boy never went searching for Krsna, he just prayed to God within his own heart and God sent him Krsna and Guru, twice. At the Cathedral where he was directed by a devotee (Sharmananda das) to Lord Caitanya’s Appearance day (where he was asked to play the part of Haridas Thakur in a play) and Srila Prabhupada coming to Melbourne 10 days later. 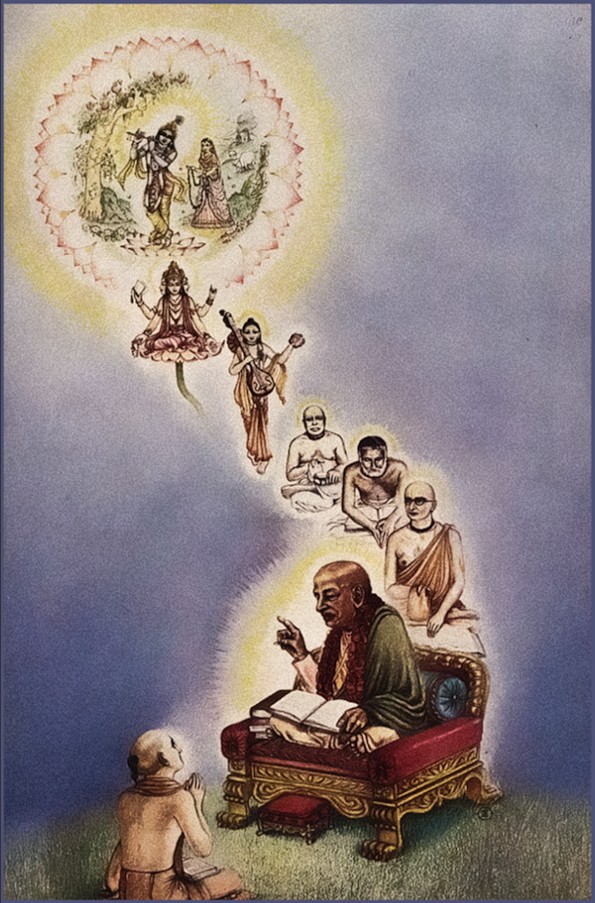 The point here is the embodiment of Guru does exist if you want. Krsna will sent him if you want. It all depends on us. If we are convinced we do not need an embodied Guru, then Krsna from within the heart will not send one, as you desire.

But even if you’re in the faraway corner of the planet, if you REALLY want the help and association of an embodied Guru, then Krsna from within the heart WILL send you one.

You couldn’t get a place further away from the rest of the world than down under Melbourne Australia. This young boy never found Prabhupada, Prabhupada came all the way down there and found him.

Although to be satisfied with the Guru in the form of his books can also be very personal and instructing, I just believe some of us need the personal embodied touch of a Guru as well, simply for the purpose of helping us with their personal association and instructions. This is because we are really not that advanced to do it on our own just with books. That’s how I feel anyway.

`Krsna is in the heart that we must NEVER forget.

God’s representative will come to us in the embodied form if we want, if we pray unconditionally, if we learn to have faith in Krsna in the heart. Why not? Why does it have to be Prabhupada? His embodied pastimes on this planet finished in 1977, you don’t think Krsna also has other great devotees here waiting for us to attract them by our helplessness? Do we genuinely feel helpless and materially exhausted like that boy did in the Church?

The young boy in the story previously found many ‘gurus’ but none of them found him. He eventually saw through them all and just kept praying and new His Guru (Prabhupada), who found him eventually, was the answers to his helpless prayers back then 36 years ago

It’s a question of what one really wants. This may mean that one can only accept Prabhupada through his books because of a world in crisis, struggle, and suspicion in this age of Kai-yuga but remember, that has nothing to do with Krsna in our heart.

The material world is always in crisis but the Guru is ALWAYS one and represents Krishna within our own hearts, and is always somewhere externally here on the planet. Krsna WILL send His embodied initiating Guru when we are ready, when we need such association and the personal embodied guidance to help us understand and initiates us into the guru-shishya parampara-,

NOTE – The young boy was me

Harmonizing faith and reason in bhakti

Is it offensive to think of Krishna’s Pastimes while chanting?

The 26 Qualities of a Devotee | Bhagavati Devi Dasi